forget the iPod nano – iPod flea is it. the smallest iPod ever.

hail to the press of Argentina, they annotated the photos and said who is who on the pictures.

as previously blogged, Ingrid and me were in Argentina to get my cousin Robert married. (note: a wikipedia link is better than a tag, don’t trust folksonomies)

END_OF_DOCUMENT_TOKEN_TO_BE_REPLACED

Back in Kaiserslautern, I finally got some time to blog the events of the last three weeks. We went to Argentine, where my cousin Robert married Luciana in Santiago del Estero. To use the time there, we also visited Buenos Aires for a few days.

Before the journey, I thought to myself: how to meet with SemWeb people in Argentine? and blogged this. Dan Brickley answered and mentioned someone called “Inkel” who might be in Argentine. I contacted Inkel (aka Leandro Mariano López) and yes – he lives in Buenos Aires and we agreed to meet on Monday, 15th August 2005 at 17:00 in our Hotel.

And thats what happened: Ingrid and me were a little late, because we spent so much time sightseeing, but when we came to the Hotel 5 minutes after 5 pm, two Semantic Web hackers were already waiting in the comfy hotel lobby chairs. Ingrid and I didn’t know if all this would work, but it did. We chatted a little about how its in Buenos Aires and then went to a little restaurant to eat – here a pic while we are on the way. 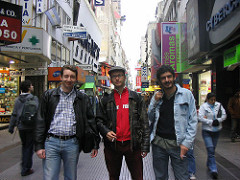 In the cafe the talk was first about the work that Inkel and Daniel represent. Inkel came to the Semantic Web a few years ago and found the foaf idea, but he missed translations to spanish. So he translated a foaf primer. After a little chit-chat, the moment of truth came: 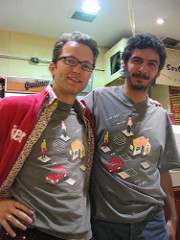 Connected together by the bounds of foaf and the same cotton on our bodies, sympathies between us went up +10. Inkel works as programmer in a company at the moment and he explained us how he plans to connect the people in Argentie, Chile and other south-american countries. He also wants to motivate people to translate SemWeb literature to spanish, so that it can gain ground there. A problem is that most people don’t speak english there, and scientists don’t publish in spanish. Daniel, the friend of Inkel, also translated a few texts and published them.

I told them about the upcoming Semantic Desktop Workshop and showed them a few papers. I had all papers of the workshop with me in printed form to read them and to know the stuff deeply. They were interested to see that we have one spanish contribution to the workshop and perhaps this may connect people a little better. I explained them our upcoming Nepomuk project and the idea of the Semantic Desktop. Actually, I used my own paper for the workshop as a walkthrough to give a little exaplaination/mini talk. I gave my copy of it to inkel, so that he can use the links and references.

Daniel has to write diploma thesis in the next months and perhaps our Jena-based GUI thing from gnowsis could help him. We have to write some documentation for it, anyhow.

After a while we moved on to a coffe-house at the other side of town (south of Av 9 Julio), a coffee house that looks exactly the same as the coffee houses we used in vienna to meet with Michael Schuster or eaon or geri all the other SemWeb guys in vienna. Astonishing how the grass-roots culture is always the same.

We sat together and talked about possible business connections. Acutally, through the weak Peso (the currency in argentine), it is quite cheap to hire Argentine programmers for Semantic Web stuff.

Ingrid ordered a “submarino”, hot milk where you put chocolote in to make hot chocolate.

The situation in Argentine is far from the ongoing work in Europe. They don’t have the big budgets for Semantic Web and most people can only do this as a hobby. Also, university professors don’t get paid very well and university research is not as good as in Europe. We are quite lucky to have the 4th, 5th and 6th framework programme of the EU with big amounts of SemWeb money. For example, the t-shirts that connected us were a deliverable of a EU project, SWAD.

Finally, after five hours of permanent chatting, I got a little achein my throat (a starting cold) and we decided to part ways again. It was a very fruitful discussion about deep topics and networking. Nice to meet Inkel and Daniel and best wishes to these guys!

wow, the world lost all its software. creepy.