some say WinFS is dead but who knows, according to the blog post by some Microsoft dude, it is changing plans.

So if you want a semantic file system, join SemFS!

yes, we hope that SemFS will integrate with Nepomuk.

here is the whole message:

When I invented the Web, I didn’t have to ask anyone’s permission.
Now, hundreds of millions of people are using it freely.
I am worried that that is going end in the USA.

I blogged on net neutrality before, and so did a lot of other people.
(see e.g. Danny Weitzner, SaveTheInternet.com, etc.)
Since then, some telecommunications companies spent a lot of money
on public relations and TV ads, and the US House seems to have
wavered from the path of preserving net neutrality. There has been
some misinformation spread about. So here are some clarifications.
(

Net neutrality is this:

That’s all. Its up to the ISPs to make sure they interoperate so that
that happens.

Net Neutrality is NOT asking for the internet for free.

Net Neutrality is NOT saying that one shouldn’t pay more money for high quality of service.
We always have, and we always will.

There have been suggestions that we don’t need legislation because
we haven’t had it. These are nonsense, because in fact we have had
net neutrality in the past — it is only recently that real explicit
threats have occurred.

Control of information is hugely powerful.
In the US, the threat is that companies control what I can access for commercial reasons.
(In China, control is by the government for political reasons.)
There is a very strong short-term incentive for a company
to grab control of TV distribution over the Internet
even though it is against the long-term interests of the industry.

Yes, regulation to keep the Internet open is regulation.
And mostly, the Internet thrives on lack of regulation.
But some basic values have to be preserved.
For example, the market system depends on the rule that you can’t photocopy money.
Democracy depends on freedom of speech.
Freedom of connection, with any application, to any party, is
the fundamental social basis of the Internet, and, now, the society based on it.

Let’s see whether the United States is capable as acting according to its
important values, or whether it is, as so many people are saying,
run by the misguided short-term interested of large corporations.

I hope that Congress can protect net neutrality, so I can
continue to innovate in the internet space. I want to
see the explosion of innovations happening out there on the Web,
so diverse and so exciting, continue unabated.

for example: how leo are you?

How Leo Are You?

Dazzled by the craze for the soccer wm in Germany, I was wondering what to do with soccer. Then, yesterday night it struck me and I knew: the world is a soccer ball! We are living on a big leather ball, floating through space. 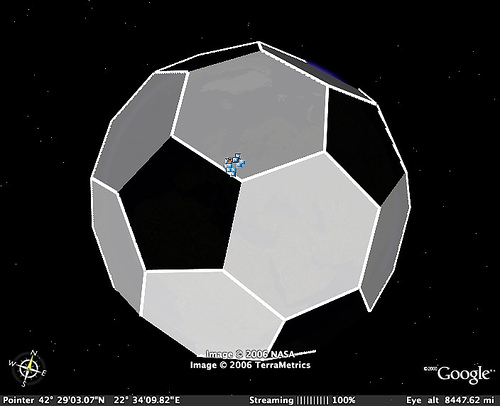 So behold: the ultimate Google Earth hack: The world is a soccer ball!

Click to see yourself (you need to have installed Google Earth first):
howgermansseetheworld.kml

The full story:
a KML overlay for google earth, created in painstaking work by Leo Sauermann,

This is how many people view the world these days. It is the biggest soccer ball that has ever been sighted. yes, very big, even bigger then the one spotted by Google previously.

How this was done?

First of all, it is important to know what a soccer ball is. A soccer ball is a “cut-away icosaeder”. I read some details this webpage:
mathematische-basteleien.de/fussball.htm.

Then I looked for a way to model it in KML. As I have never done KML before, I had to look for tutorials and docu first.
Ok, the easiest way is to assume the center of the world as center of the soccer ball.
I needed the coordinates of the corner-points, these I found in a Java snippet that creates a rotating soccer ball.
This snippet of java helped me.
I copied the code and fumbled around for three hours until I could convert the xyz coordinates to lat/lon coordinates.
Also, Google Earth gave me headaches as it discriminates on polygons, if you draw then clockwise or counter-clockwise the color gets changes
(argh! And I thought my stlye was wrong).
After the corner-coordinates were setup, I created a KML file with the corners numbered.
Then I had to find all six-corner and five-corner objects and added them to an array.

Finally, I added all real soccer stadiums for the WM
and the previous biggest soccer ball
to the KML, as sugar on top – for you users.

enjoy, if you have questions:
leo@gnowsis.com

The source code and all needed to go on is on my homepage:
soccer.zip.
Also in SVN in the fuzzbutt project.

This KML is licensed under creative-commons Attribution license
http://creativecommons.org/licenses/by/2.5/

inspiration and code taken from:

Man Luo’s Diploma Thesis on Semantic Meeting Annotation is published. She developed a prototype, based on Gnowsis alpha 0.8, to manage Meetings semantically, identifying problems in PIM and solving them using Jena and Java. 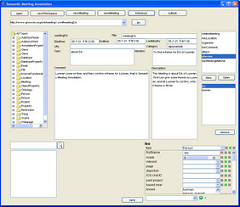 The treasures for you Semantic Web hackers:

Abstract
Nowadays, the personaldesktop contains an enormous amount of information, which we use, process, and search in our daily work. Facing so much information, people pay more attention to Personal Information Management (PIM), which enables people to gather, organize, and synthesize information with flexibility and speed.

A significant use for PIM is in business environments, for instance, categorizing business-partners contact information; arranging the agenda; retrieving business information in internet and so on. Among the business actions meetings are important components, and accordingly the management of meeting is treated as a cornerstone of PIM. It assists people to annotate meeting information, collect related materials, and manage different meeting notes, etc.Using current PIM tools, we still face the problems of filing information and information overload. In order to exceed today’s state, this thesis presents a meeting management tool based on the Semantic Desktop environment– Gnowsis, which is an extension of desktop computers using Semantic Web techniques.

We call this tool Semantic Meeting Annotation. It builds on a Meeting Ontology that defines all the elements and relations in the meeting domain using the Web Ontology Language (OWL). The ontology binds with the annotation application to provide the user a semantic annotation environment, that is, the user can annotate meeting information with all kinds of data, and create links between a meeting and the related data according to the semantic relations defined in the meeting ontology. Other applications (e.g. Microsoft Outlook) based on the Semantic Desktop technology are integrated.

We think that, using semantic meeting annotation will enable the user to annotate a meeting effectively and semantically.

Here the report by Danish Nadeem:

…Today I watched [DFKI] winning 3:1 against Fraunhofer Institute [IESE] in Football.Much thrill could be sensed in second half of the game, when 2 spectacular goals were made by dfki team, offcourse some credit goes to pro-DFKI wind

And another one by Martin: 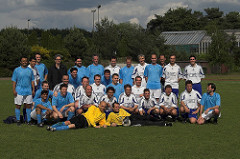 Gunnar attacks Baumann with real science, Baumann striking back with computational culture. Both armed to the teeth with deadly MacSaber powerbooks.

this MacSaber application sure is an argument for buying a new powerbook. read my previous post on that.

To ‘do an Amir’
To con money out of someone, lie or be otherwise dishonest, only to face ritual humiliation on a worldwide scale.

read the whole story on news.

and, if you dare, look at the original site by the laptopguy. Although Jesus says: never do bad things to fight bad things.

Honda has published a history of their Asimo robot series, very interesting and a nice background on research: boys, it takes time to make something good.

that inspired me te brushup the image by them and compare it to current semantic desktop proceedings. If we compare the state of ASIMO with semantic desktop, it would look like this: 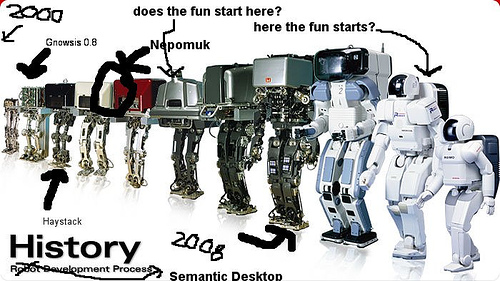 robotics is sometimes as ambitious as semantic web. It hink the current Semantic Desktops look like early ASIMO prototypes while end-users expect them to look like Microsoft Software, like people expect robots to look like Enterprise’s ‘Data’ and robots look like metal with motors.
there is hope though, that we will be faster with semantic desktop than with humanoid robots