Last weekend we had the fourth Semantic Desktop Hands-On Workshop, this time again in Berlin. There were about 25 participants from the whole world, people from various open source Semantic Web projects, employees of companies, interested friends, professional consultants, and semantic web evangelists. All were practioners, all anticipate using the semantic web. 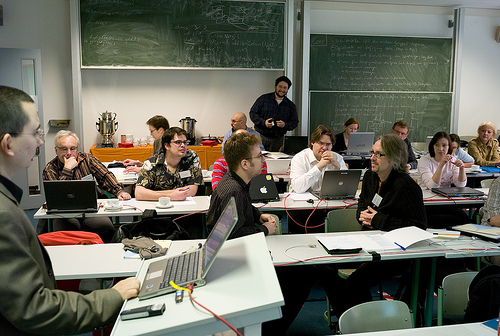 Nothing could possibly go wrong, and it turned out to be a great success. We had three days of intensive discussions, code hacking, demos, talks, talks, talks, and a special social event on each day. At the end, everybody was just exhausted and we had a wrapup session in the Bebop-Bar, discussing about the future of the Semantic Web until 03:00.

Here is a small video I hacked together using photos from our semantic desktop hack flickr pool.

And here more pictures from this pool: 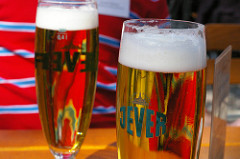 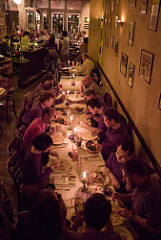 Matthew Magain blogged the roadmap for the Web 3.0: 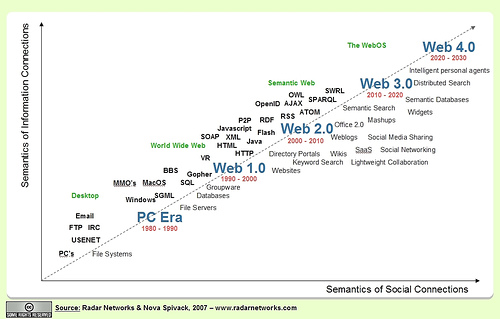 this is a follow-up to my thoughts about the semantic web 2.0

Kudos to Michael Sintek for pointing me to this roadmap.

Davor from the Center for knowledge transfer in information technologies/Jozef Stefan Institute wrote an e-mail, pointing to the videos of the ISWC and ESWC conferences. This institution recorded all talks at these conferences and put them online, a valuable resource if you are interested in Semantic Web.

Here is their message:
The videos are online a few months now and we believe that you would be interested in seeing them. They are published on our new video-educational web portal which has more than 1900 educational videos, including various tutorials, workshops, interviews. We hope you will enjoy in your lecture and will browse our portal…

Marian Bantjes blogged a year ago about the art of heraldic banner design. First of all: I want such a banner, darn that I don’t carry my shield with me every day. Perhaps the back of my Laptop will also do. Second, this aint no bad way of annotation.

“…Corporate logos are most often completely meaningless, or they try to portray something quite complex without having a language to express it.

“Designing logos would be an act of science: careful symbology applied in, yes, a creative and pleasing manner, that tells the tale of mergers, takeovers and change of business. At least then it would all mean something. Anyone could look at a logo and read its history. Logo changes would indicate what had changed. And it wouldn’t matter if the CEO did or didn’t like green; wanted or didn’t want a dog; loved or hated the shape. Then at last, we could look at a new logo and understand, “Ah, a young telecommunications company with sales over $100 million/yr which has merged with a digital company and is transistioning into the entertainment industry. I see.”

Danny Ayers blogged :
If you only watch one video this year, let it be this one: The Semantic Web of Data (streamed, 8mins 24secs)
I can only copy that, apart for my admiration for Tim Berners-Lee, this video has some very nice things to remember. Tim has the vision, he had all the ideas in the first place and he is professional enough to have no problem repeating himself, explaining the semantic web again and again.

The web in the first place was something which solved a particular frustration I had, it scratched an itch that ….we would make life a whole lotta easier. The web of data, Semantic Web, same thing, frustration that I cannot pull that data and pull that other data and connect them. … How do these publication fit in with these events. … Where is the nearest coffee place to that friend I want to take out for lunch.

So, he did the right thing: he solved a problem he had. Usually you would say that you must not use yourself as your reference customer, but it seems that there are exceptions… 🙂

The video was done by the technology review, an interview. It only features Tim, no commentary nor questions.

Tim O Reilly can be thanked for investing his time and his companies’ resources into the web 2.0 buzzword: its good for everyone. Finally we know what we like about the web, if you don’t know it yet, always read the original first.

Given this great success, namely that web 2.0 and its description really fit so well the reality we face in the web, people want to ride on with buzzwording and predicting the future. I happily join.

Today again I got an e-mail mentioning and advertising the web 3.0, which will, let me assure you, be the next big thing. Increasing the number by one and saying its the next big thing is the right approach, but it can be taken by so many. What we can’t copy is the fact that Tim O Reilly stated the obvious, was able to describe the existing facts in words that caught. Web 2.0 is a way of asserting ourselves what we do, giving us the satisfaction of undestanding why google, napster, flickr, bittorrent, etc are such successfull enterprises.

So, coming to web 3.0, what is it? At DFKI we have written a paper about web 3.0 being the convergence of web 2.0 and Semantic Web. The e-mail from semantic web school I got today goes into the same direction.
And there is this NYT article on web 3.0, that you can google now for yourself. Its all in the semantics, and with semantics we hope: Semantic Web.
But who says that this is the final view on web 3.0? Any C-Blogger can invent this word, or make a new one, and you can search for web 2.5, web 1.0, web 0.0, web 10.0, web 2007.0, or whatever comes to your mind, its an open field of invention, only limited by the amount of floating point numbers, which are, lucky C-Bloggers, infinite.

Now coming to my point: what I really anticipate, and perhaps you are with me, is the Semantic Web 2.0. As easy as it looks, its exactly what it is: a simple combination of the ideals of Semantic Web and Web 2.0. Semantic is the front word because its easier to pronounce this way, but they are equal partners and both needed. The Semantic Web is longing for Web 2.0. At the moment the semantic web is scientific driven, and as we have read in previous blog-posts, for a scientist everything can be a science. Hence, the Semantic Web as such is pretty easy to use and deploy (RDF is just XML, with URIs as sugar and ontologies being the cream), but scientists working on it at the moment are pushing these innovations further every day. So, enterpreneurs a
re needed that see how data integration using Semantic Web technology can save a customer money and time.

On the other hand, web 2.0 companies “be nice” but are usually working under capitalistic constraints, if not filling their own pockets, at least the shareholders’. A key in business is now to be open to data integration, like RSS feeds or Web APIs that allow you to manipulate your flickr photos, or the classical google maps API that we find useful everywhere.
The problem here is, that if you have a running system, never change it. The APIs are based on XML, and simple HTTP calls (REST). Why bother upgrading to Semantic Web?

So, there has to be a reason to extend a successfull web 2.0 business to run Semantic Web. What are the keys to open this door? Let us come back to concise words describing web 2.0 and focus on some of the points

What does Semantic Web 2.0 add to this:

etc etc. you now know enough to go on yourself.