Due to current rumour that appears on the net and in chats around me because of my talk on wednesday at ISWC: gnowsis is not part of KDE. But nepomuk-kde is part of kde.

its all a bit complex: gnowsis was my diploma thesis and was continued as open source project at DFKI, where I started working in 2004. In 2006, NEPOMUK started as a EU project (hence NEPOMUK was then used as project name for an EU research project, not for software) which funded research on Semantic Desktop. Gnowsis continued a bit until about December 2006, when we reached version 0.9.2, which is the last release.

Since then, most of our energy goes into dev.nepomuk.semanticdesktop.org (“Psew”, nepomuk-server) which is a Java-based Semantic Desktop research prototype, and much work also goes into nepomuk.kde.org, which is a KDE based semantic desktop product.

All of them share the same concepts: RDF on the desktop, a PersonalInformationModel, Annotation of everyday things, embedding into existing applications (=thats where we differ from others like haystack).

but as people keep asking about it: I do long for a working semantic desktop, and porting gnowsis’ simplicity to KDE would indeed be nice.
How nice? Nice enough that you want to pay me something to do it?

Because I would like to continue working on this the next years (NEPOMUK EU project or not) …. the first six years were already quite rewarding 🙂

After three years of development Aperture is stable enough
to drop the .beta suffix from the release. 1.2.0 leverages
architectural improvements made in 1.1.0.beta to bring
support for compressed archives and to streamline
email processing. A completely new service – the
DataSourceDetector allows applications to provide
suggestions to users about the data sources on their
desktops. A host of bugfixes and minor improvements rounds
the image of the leanest and meanest version of Aperture
ever made. Enjoy.

“Semantic Technologies have a high potential for Enterprises” …. The event is in German, nice speakers. Tassilo Pellegrini from Semantic-web.at is probably talking about their company experiences, I would guess we hear some nice war stories here.

Jana Herwig from the Semantic-Web.at team blogged about Brian Davis and my talk at the webofdata.info practical semantic web workshop.

The next session at WOD-PD was given by Leo Sauermann (German Research Center for Artificial Intelligence DFKI, Germany), and Brian Davis (DERI Galway, Ireland). Leo introduced the idea of the Semantic Desktop, and more specifically, the Nepomuk Social Semantic Desktop.

This was just forwarded to me by Andreas Dengel:
“A Malaysian government applied research agency wants the country to be recognized as the first Web 3.0 society in the world.
MIMOS is driving the semantic technology industry in the nation towards this goal.”

“Semantic technology is driving the next generation of the Web, the semantic Web, a machine-readable Web of intelligent data and automated services that amplify the Web far beyond its current capabilities,” said Dato’ Wahab, at the agency’s Semantics Symposium in Malaysia.

Today in the morning, I had a sudden “insight” about one of the problems of RDF and Semantic Web: it misses some of the value that XML offers. This is what my daily commuting bike ride is for, thinking…

The adoption of Semantic Web rises and falls with the adoption of it in standardization bodies. For example the Oil&Gas industry of Norway is thinking about Semantic Web, and I have recently been talking with people from the automotive supplier industry about Semantic Web. To interchange data in a business-to-business environment you would expect that RDF has more features than XML, but in fact, it doesnt.

So, if you are an industry, you already havean XML based standard, moving to RDF without the expressiveness of XML and without the notion of validation is tricky. RDF should have more features, not less.

Also the stack of XML technologies must be embraced better, for example a XSLT-friendly RDF/XML serialization. Please, dear reader, solve these problems and make a company around it. 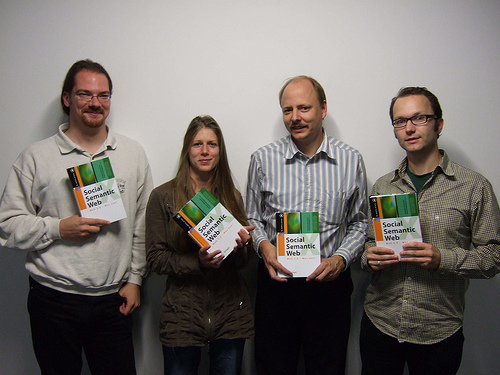 From left to right: M, Kinga Schumacher, Ansgar Bernardi, Leo Sauermann. We all were authors on the chapter on “Semantic Desktop”, Malte additionally contributed to the chapter on Semantic Wikis. As you see we are very happy about our complimentary author’s copy. Besides that – das buch ist gut.

Read it – in deutsch 🙂 . The authors (besides our small contribution) are the who-is-who of the German-speaking Semantic Web. Chris Bizer, Sören Auer, Sebastian Schaffert, Krötsch&Vrandecic, etc …

edited by Andreas Blumauer and Tassilo Pellegrini, it brings together many authors from the practical side.