An interesting thread about file metadata for KDE got my attention: Portable Meta-Information. I waited a month until it cooled down and re-read it to draw my own conclusions.

The author, zwabel, correclty identified the problem that the Semantic Desktop must be compatible with the past – and with the future!.

I think, for the future, we need to find a way to keep the users data together, so it is as persistent and approachable as the files themselves:
– When the user copies his photo archive or backs it up to a CD, no matter what application he uses, meta-information like ratings, comments, or tags, have to move together with the photos
– When the user has a fresh install, and copies his photo archive from a CD to the disk, the meta-information for the photos should be just there
– User-generated meta-data should _never_ be lost just because a file/directory was renamed, a mount-point changed, or whatever
– User-generated meta-data should not be lost when a file completely unrelated to the item is damaged or deleted(Database)
– In 20 years, when KDE4 is history for a long time, and I find an old photo backup CD, the meta-data should still be readable

zwabel then suggested to store the metadata additionally to the central store (which NEPOMUK needs for the search engine and is essential anyway) in a multitude of “.meta” files, which are stored in the same directory as the files. For the file picture1.png, the metadata would be in picture1.png.meta. I think this is a pragmatic idea and would say:

Lets store it in picture1.png.rdf

As serialization, I suggest the W3C RDF standard, which we use in the central NEPOMUK store anyway (in the database) and which has a well-readable standardized serialization format in either XML or a plain-text format. To achieve linux-geek compability, I suggest the plaintext format. For example, to add authorship information about picture1.png, it would be:

Note that the <> is a known shortcut for “this”, the equivalent rdf/xml is: rdf:about=””.

Sebastian Trüg also argues in a way that also leaves both ways open for the future, database and filesystem:
“you need a database anyway. Thus, in the end, the only solution I see at the moment is a kind of copy wrapper that makes sure metadata is copied with the file. Then one could also send information like a person or a project to a friend and the system would pick up all interesting metadata.”

So – how do we format the metadata inside the files? The same way we do as in the RDF repository of nepomuk. There we use the NIE and NAO ontologies. But Pushing Dublin Core is also a good way to do, but do it the W3C way, standardized.

Using the RDF encoding of Dublin Core and for example Turtle/N3 as serialization format gives a rock-solid W3C industry standardized (or at least well implemented) way.

Because the world is not perfect and needs many possible ways to evolve, we can store the metadata in redundancy now in as many places as possible – but in one format. For freedesktop and nepomuk RDF is the best choice, in my (not so humble) opinion. It is serializeable, it can be stored in a database, it can be hosted on the web. No other standard has this. It is embedded in PDF already in the XMPP format.

As blogged in January, Gunnar, Remzi and I are working for DFKI on the Organik-Project. As true hard bloggin’ scientists, we keep on reporting.

In the next two weeks, I will gather an exhaustive test-data collection of texts that we use for ontology learning. I hope to gather around 10.000 documents from various sources that have a topic overlap. We need e-mails, office documents (contracts, etc) and news documents. There are a lot of test data sets out there, the question is now to pick the right one. Also, in OrganiK we have SME partners who could provide some data.

After this, the next step will be to create a taxonomy learning module that analyses the documents and semi-automatically (or fully automatically) creates a taxonomy out of it for future classification. If its fully automatic, I expect that the taxonomy will have probabilistic elements in it (“it thinks that this is a customer, but only 60%”). If we work with a probabilistic model throughout the whole project, we can rank everything all the time, maybe this will reduce human work. We will see.
Anyone has experience with taxonomies that have a weight added? Its similar to a TF/IDF rank. 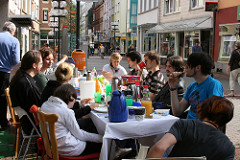 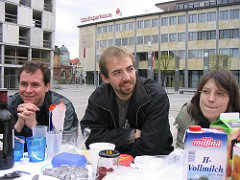 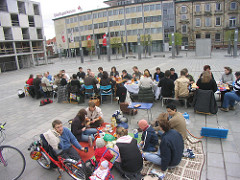 “Adults having fun so children will want to grow older”,
Hobart Brown, glorious founder of the race.

en.wikipedia.org/wiki/Kinetic_Sculpture_Race
A Kinetic sculpture race is an organized contest of human-powered amphibious all-terrain works of art. The original event, the Kinetic Grand Championship in Humboldt County, California, is also called the “Triathlon of the Art World” because art and engineering are combined with physical endurance during a three day cross country race that includes sand, mud, pavement, a bay crossing, a river crossing and major hills.

This year is 41th Anniversary! The first race started in 1969 in Hippie-California. How about making a race this year in Klosterneuburg, next to Vienna? We have wild cross-country, road, and water. I would like to find a few mates for a team to create “Free Ellie” and you should also make a team! its fun, it teaches you artwork and handicrafts.

and look at all the fun it can be after you do it for many years:

I search for alternative-minded people who would like to help out, co-organize, form teams, and carry on the spirit of this family-friendly event in Europe. Are you in? Write to me or comment below.

Our design is intentionally simple so that its possible to build it within a week – would you like to ride in this? then help building it! 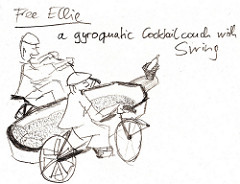 Webinale 09 is the premier german conference about web 2.0. 70 speakers on two days, on all relevant topics: Web technology, scaling, running services, marketing, business, future trends, ria, mobile web, social networks and communities. Various hands-on sessions to learn about building iPhone apps, Air/Flex, etc. A startup day to see and meet the next xing or facebook. And facebook and xing groups to do some boo-haa already today.

see me speak on 26.5.2009 from 10:30 to 11:30 at the ufo-lookalike congress center in berlin about the fact that even Barack Obama’s new administration does the semantic web now, and other bits. Free your data!

Oh my, I am happy that I live in these times: