News from the PIM 2008 workshop. I made some pictures, Manas Tungare uploaded them here. 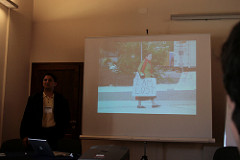 Great workshop, nice to meet all the people I have been citing for long.

He summarized literature about URIs, SOA, and REST into something combined:

RESTful SOA may argue that this mainly fits for a provision of fix document files. A dynamic SOA server can easily implement this “generic” URI concept without any redirection, just by rendering the content in the requested format on demand. This view satisfies content provision, while the redirection architecture better supports linkage and reference. It also leverages resource management and governance, be it in the Semantic Web, or in RESTful SOA. And may be these two application areas are not so distinct from each other.

If you look at one paper from the CHI2008 conference, look at “Video Browsing by Direct Manipulation“. The conference is the place where innovation in computer-human interaction is presented each year.

The idea of this system was developed by four groups in parallel, without being aware of each other (in the beginning) … the other paper was “DRAGON: A Direct Manipulation Interface for Frame-Accurate In-Scene Video Navigation”

Abstract:
We present a method for browsing videos by directly dragging their content. This method brings the benefits of direct manipulation to an activity typically mediated by widgets. We show that this method can out-perform the traditional seeker bar in video browsing tasks that focus on visual content rather than time.

I wish they would put the system demo video on youtube. I have both the paper and the video on the proceedings, but its up to the authors to publish this. – just saw the project homepage

Get to know how cool URIs can be, for the Semantic Web.

Everything needs to be identified, being it a person, a web document, an image, or a mythical unicorn. The Semantic Web and RDF are based on the assumption to identify them all using URIs. But these need to be cool, so read “Cool URIs for the Semantic Web” which was published on 31.3.2008 as a W3C Working Group Note.

The official statement is:
2008-04-01: The Semantic Web Education and Outreach (SWEO) Interest Group has published an Interest Group Note Cool URIs for the Semantic Web. The Resource Description Framework (RDF) allows users to describe both Web documents and concepts from the real world people, organizations, topics, things in a computer-processable way. Publishing such descriptions on the Web creates the Semantic Web. URIs (Uniform Resource Identifiers) are very important to the Semantic Web, providing both the core of the framework itself and the link between RDF and the Web. This document presents guidelines for the effective use of URIs in the context of the Semantic Web.

The note was edited by Richard Cyganiak and myself, and it took us from November 2006 (ISWC, where we had the idea to write it) until yesterday, the 31st March 2008 to finally finish it. Max Völkel was also with us at the beginning and helped us to stay motivated. I am happy about this event – we have finished it! Excellent! Horray!

Read some comments from reviewers that also made us happy:

Alltogether, we had a hard work to get it right and there have been some last minute changes on 20th March 2008 incorporating much feedback from the W3C Technical Architecture Group.

Many thanks to Tim Berners-Lee who invested much time and helped us understanding the TAG solution by answering chat requests and contributing many emails with clarifications and detailled reviews of this document. Special thanks go to Stuart Williams, Norman Walsh and all the other members from TAG, who reviewed this document and provided essential feedback in June 2007 and September 2007 about many formulations that were (accidentially) contrary to the TAG’s view. Also special thanks to the Semantic Web Deployment Group‘s members Michael Hausenblas, Vit Novacek, and Ed Summers’ reviews and their review summary sent in October 2007. We wish to thank everyone else who has reviewed drafts of this document, especially Chris Bizer, Gunnar AAstrand Grimnes, Harry Halpin, Xiaoshu Wang, Henry S. Thompson, Jonathan Rees, and Christoph Päper. Susie Stephens reviewed the document, managed SWEO, and helped us to stay on track. Ivan Herman did much to verify that the W3C requirements are met and submitted the note.

Did you know images have weight and can fall of websites? Yes, they can. Truth is, they are held in position by fixation, you can remove the fixation of images.

go to HTML Gravity to learn how.

Written by me, GPL license.