This article “Whatever happened to te Semantic Web?” about the failure of the Semantic Web is interesting. I may note that my personal failure to realize the semantic desktop – an end user application to use data from the semantic web for personal information management – contributed to the overall fail.

END_OF_DOCUMENT_TOKEN_TO_BE_REPLACED 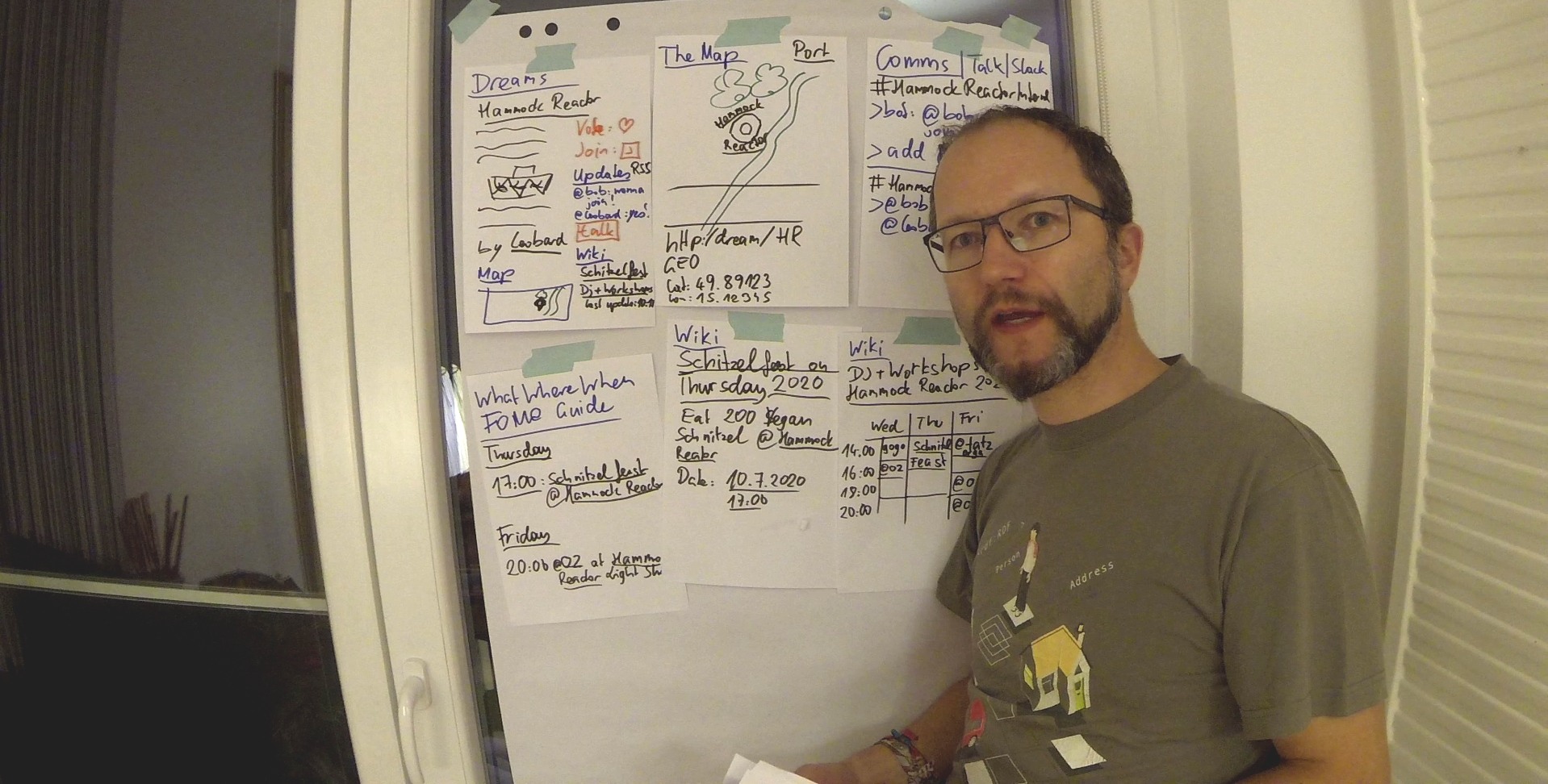 This is a set of 4-videos of Leobard (Leo Sauermann, me), talking about how we could use RDF/LinkedData/Schema.org to connect the various platforms of TheBorderland/Dreams/Realities/Burnertickets. I used video as a medium to convey the ideas, as I think it was the quickest way for me to transport it. Writing this up would have taken longer and as my Burning Man community contributions are done in my pastime, I try to make it fun for me to do this.

END_OF_DOCUMENT_TOKEN_TO_BE_REPLACED

What we need is a personal app that allows us to link our own data. An app where I can link projects to related appointments, people, things, documents/files, and notes. And all of these with each other. And tag everything.

It could be easy to build it on top of NextCloud or on top of Google Documents. It could be done based on my work about the “Semantic Desktop” or “NEPOMUK“.  The concepts I developed back then would still apply today. And all the research others and I did in the wake of NEPOMK would also still apply.

I would call it “Personal Linked Data” or “Personal Knowledge Graph”. Not even TimBl himself calls it “Semantic Web” these days, but rather “Linked Data”.

And to illustrate that blogpost here, I take the cover of my phd. Lookit, its SVG:

P.s. and the first Link I post from my Android using the wordpress App.

From now on, you find my posts in this blog I now host on my private page:
http://www.leobard.net/blog/

END_OF_DOCUMENT_TOKEN_TO_BE_REPLACED

News: portatour is a Software for route-planning and route-optimization for field sales force / sales reps. It is the future of fully automated sales-route planning for your field sales force, consultants, and service team members. Automatic scheduling can cut up to 25% of your mileage and save CO2, increasing revenue the same time.

You may be interested in this because that is the company I have been consulting the last months. It is a fascinating business to optimize sales routes and I help in marketing and sales.

Sales reps have been planning their schedules and routes manually, which took hours to do and essentially it is pretty hard to put together a meaningful itinerary with all of your customers, ranked by priorities, honoring call frequency and scheduled appointments – using only an excel sheet of your customer addresses and a road map.

In fact, it is so hard that even computers can’t do it easily – sales route optimization is classified as “NP hard problem”, which are the toughest problems in computer science. Reason is, that with growing customer numbers you have exponentially more calculations to do. portatour can optimize your routes to 1000 customers, which will basically plan you throughout the whole year. Now, between 1000 customers, you have a million possible drives between all of them. You can visit 5-20 customers a day, so portatour needs to optimize between 50 and 200 tours to visit all of the customers in an optimized way. BUT portatour also picks, which customers to visit. That means, it also looks at the desired call frequency (call interval) and includes customers earlier in your route, when they are more urgent to visit. Over a year, portatour will pick 5-20 customers each day from a set of 1000. If you pick every customer only once, you end up with 1000! (factorial of 1000) ways to do this, which is a number with 2567 zeros after it. The number of atoms in the universe has only about 80 zeros. Within these choices, portatour looks for an optimized route. So, if you are a sales rep and spend your sunday planning your next week’s sales routes, you may want to look for a software that helps.

portatour® plans sales trips within seconds at the push of a button, giving sales reps back valuable time which would otherwise just be left on the road. They can visit more customers, drive fewer miles.

portatour® is applicable in different scenarios, here are a few:

I updated my homepage…yes, besides this weblog, twitter, facebook, flickr, soup.io, … etc etc … I also have a homepage. I never find the time to update it, but thanks to soup.io there is an activity stream on it.

I did it because I wanted to host GodSees in a long-term way, this thing here:

while doing these updates, I spent HOURS on divs, margins, floats, and google fonts. Thank God I am not a designer, I need ages to get things done.

On 2.6.2011, Google, Microsoft, and Yahoo! announced Schema.org. Schema.org is intended as a standard to mark up data on webpages. This brings these three companies one small step closer to the Semantic Web.

Google, Microsoft, and Yahoo! announced their shared support for schema.org, and call for adoption of their new standard from all webmasters. If you follow their call, you should change your website and write your data in their format.

To give an example (from their website): Instead of writing “Avatar was directed by James Cameron”, you would write:
<div itemscope itemtype=”http://schema.org/Movie”>
<h1>Avatar</h1>
<span>Director: James Cameron (born August 16, 1954)</span>
<span>Science fiction</span>
<a href=”http://www.youtube.com/watch?v=cRdxXPV9GNQ”>Trailer</a>
</div>
For the end-user, this looks the same as any other website: Avatar, Director: James Cameron (born August 16, 1954) Science fiction Trailer

For a machine, or a search engine, the data would be readable and could be imported into a database, such as wikipedia or freebase. Or your personal movie-booking application could show you a trailer next to the ticket. Great! Benefits!

The message is: webmasters out there, adopt! For you who follow the blogpost by Google,Yahoo and Microsoft, you can start adopting!
But hang on, haven’t some of us just installed Drupal 7 and used its RDFa generator to do the same? Didn’t we markup your website with facebook’s opengraph protocol a year ago? And what about those Good Relations markup that Bestbuy did use, and that Google used to bring prices to the search results? This was a good investment, and it showed that the general idea works – standards for metadata. We are heading in the right direction. Now the three big companies worked to continue further:

The FAQ on Schema.org say:
Q: I have already added markup in some other format (i.e. microformats, RDFa, data-vocabulary.org, etc). Do I need to change anything on my site?
If you have already done markup and it is already being used by Google, Microsoft, or Yahoo!, the markup format will continue to be supported. Changing to the new markup format could be helpful over time because you will be switching to a standard that is accepted across all three companies, but you don’t have to do it.

They also say: We will also be monitoring the web for RDFa and microformats adoption and if they pick up, we will look into supporting these syntaxes.

Its a chicken-egg problem:

Maybe giving the chicken a bit more time to hatch its old egg and supporting it could have helped. But maybe also the new egg is better and the chicken should really walk over and hatch that one…still, its a new egg and needs to be hatched and it remains a chicken-egg-problem.

In theory, RDFa could have been used as basis for schema.org, but wasn’t. As part of HTML5, the microdata standard was developed. People will need to follow the schema.org bandwagon now. Less risky would have been to reuse RDFa as a markup and publish a schema on schema.org. But it seems the big three companies put their bids on microdata now. This is a signal that can be interpreted in two ways: if we look back we could infer from the RSS/RDF/RDFa/Microformats/Microdata story that it continues and we are facing an era of often-changing standards established by rivaling companies and continous investments needed by webmasters to keep up. If we look into the future, microdata (and its compability with RDF) could be the stable solution for the coming years.