OMG I forgot to blog this for three years. Alas, here it finally is.
I was addicted to ultima online seriously, from about 1999 to 2001. I bought the game in New York and then played it intensively all my waking moments. Whenever I was at work or at the University, the main thoughts running through my head were: more strength, going to the woods for lumberjacking and hunting (= in ultima).

Obviously, a perfect ground for a hack later on.
In 2004, freshly joined at DFKI I made a mashup of beloved ultima online with beloved Semantic Web, resulting in a few e-mails exchanged with some ultime hackers (including tensor from ultima-iris.de, now called iris2, we even had plans to bring this to a higher level 🙂 and a python script to extend wolfpack, a free clone of the ultima online server software.

The result was, that within medieval magic world, you could go up to some characters and ask “news?” and be rewarded with the character reading the news from planetrdf.com for you, ingame. Second, more interesting, it would take all your contacts from your outlook address book via Gnowsis and put them into the game – as rabbits. In many demos I had to kill Libby and Dan to free the plains from too many white rabbits to follow 🙂

Alas, here is the screenshots that rotted on my harddisk. 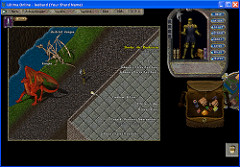 It all was done according to another great plan from us, probably Sven Schwarz and me discussed it.

But the goal was completly different, the typical semantic web idea: what if we could manager our photos, MP3 files, documents, communication with friends, and meet in a 3d virtual environment? What if we could see others that are at the same “place” as us, and exchange information with them? In Ultima, it is possible to hack objects that they can have links to the web – we would have used this to support the gnowsis protocol (back then, still a great idea) and HTTP. Tensor and I also planned to make it possible to exchange MP3s via P2P and Ultima Online as interface.

The difference in knowledge work when having a 3d environment around you is: you see who else is having the same problem as you, when you search for some documents, the people have to go where the document is. I would guess that this implies similar outcome as do communities of practice or coffee-corner KM techniques. The MP3 people? they hang out in Jhelom, But christian pop you say, folks listening to this usually hang out in Buccaneers den. You wanted to search for SemWeb hackers? Why not look in the prism of light dungeon, their link collection is on the walls there and several grandmaster mages have to keep the doors of inference shut 24/7 to save the planet, etc.

I cannot be bothered to get it running again, to repeat the glory you would need Ultima Online, wolfpack, rdflib for python, and these scripts:

The second one shows how you can trigger ingame events using python and RDF.

The conclusion of this story is, though, that Dan Brickley was quite right when he thought loudly about buying an island on second life and hack SemWeb stuff into SecondLife, all your triples are belong to SL. Anything going in this direction is going to be awesome, I would guess. Web 3.0 in 3d, that has even the same numbers: Web 3.0d. Sounds like a patch to Web 3.0

One Reply to “ultima online VS semantic web”