Thanks to the tightly entangled web and closeness of interest, I met Walterra. Usually known as Walter Rafelsberger, I noticed him as blogger and being interested in similar topics. Maybe you remember my post about his holy grail of PIM.

So, after many e-mails and exchanging phone numbers, and managing to be in the same city at the same time (not so easy), we drank a beer at the nice wifi-enabled geeknest dasmoebel.at. Short note in history: Walter was also at I-Semantics 2007, so we had the possibility to meet before, but alas, didn’t happen. 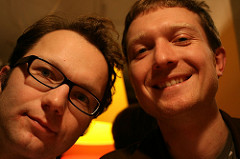 He works (or starts working soon?) at the fresh-founded elite-super-university “modul” which is located at the nicest spot in the 19th district of Vienna, Kahlenberg. (Accidentially also the place where Ingrid and I had our marriage party). So, besides the great location the modul university offers excellent courses (or will offer, they are setting up at the moment) and is also the home of Professor Arno Scharl. I met him at I-Semantics and we discussed possible mutual projects with DFKI. You all should know Scharl from his book The Geospatial Web.

Scharl and the modul university work on projects like idiom, mediawatch,
and the US election 2008 web monitor. They munch a lot of data, digest it, and then visualize it as nice as you can. Round corners, great backgrounds, shady buttons, nice. And good visualizations of ontologies.

Walter further pointed me to tupalo.com, something similar to plazes.com, but run by a Vienna Startup. Since plazes changed their whole business model from “a useful tool to find free wifi spots and other areas of interest and to see where you travelled to” to a “web 2.0 buzz that will surely make us rich by offering the same crap as twitter” I am eager to find a replacement for plazes.com anyway (plazes: where is the f***ing “wifi cafe in vienna” search feature?! you killed your best features.) But alas, Tupalu does not offer the desktop-app-using-network-mac-address way of identifying hotspots, so they are also bare on features.

Another thing you may not want to miss is Meral Akin-Hecke’s Digitalks.at socializing and networking effort. Its something like a barcamp, but for newbies. Invited speakers talk about the web and new technologies, interested people can learn about it. The next is 15.January 2008 on Virtual Worlds (probably in german), and of course, in Vienna.

We also touched the topic of what the hell is langreiter.com doing these days? Blogging, but what business is coming up? Similarly, we found out that Walter knows Andreas Blumauer, adding prove to my theory that Andreas knows everybody related to Semantic Web in Austria.

Wish you blessing, was nice chatting with you Walter! And, as you have read so long: here is the motivational poster picture of Walter you will love to see.