The masses lost their instincts, and may have more fear from terrorists than cancer.

How much are we animals? Susanna Hertrich has a project on this topic:

This project picks on how much today’s people have detached themselves from their original animal inheritance.
…
It is said that no other generation before has been as anxious and risk aware as ours. Other than animals, we aren’t equipped for the challenges of contemporary living. We don’t have the abilities to identify the real dangers in a surplus of potential threats and horror scenarios offered to us by mass media. 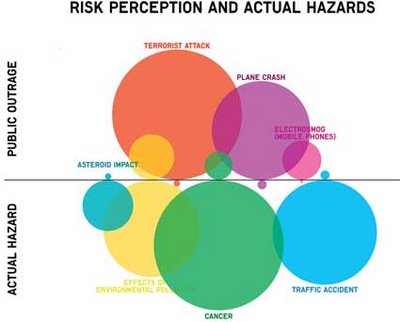 Jonathan Hartley (whom I met two weeks ago in Krakow) blogged about it from a different perspective:
Susanna Hertrich has an art / thesis project to artificially stimulate people’s threat perceptions (by giving them goosebumps, or making hairs stand on end) in response to actual threats, as opposed to perceived ones. It’s a topic that I’m unnaturally preoccupied with, since the most egregious examples of the disparity between the two seem to intrude on my life every day. My opinions about whether any given threat is real or illusiory seem to differ from almost everyone, but I’m going to stubbornly cling to the idea that everyone else is crazy. Take the entry on ‘terrorist attack’ as an example (see diagram.) Public reactions to the topic remind me of nothing so much as a stirred-up ants nest, a psychotic, ineffectual frenzy.