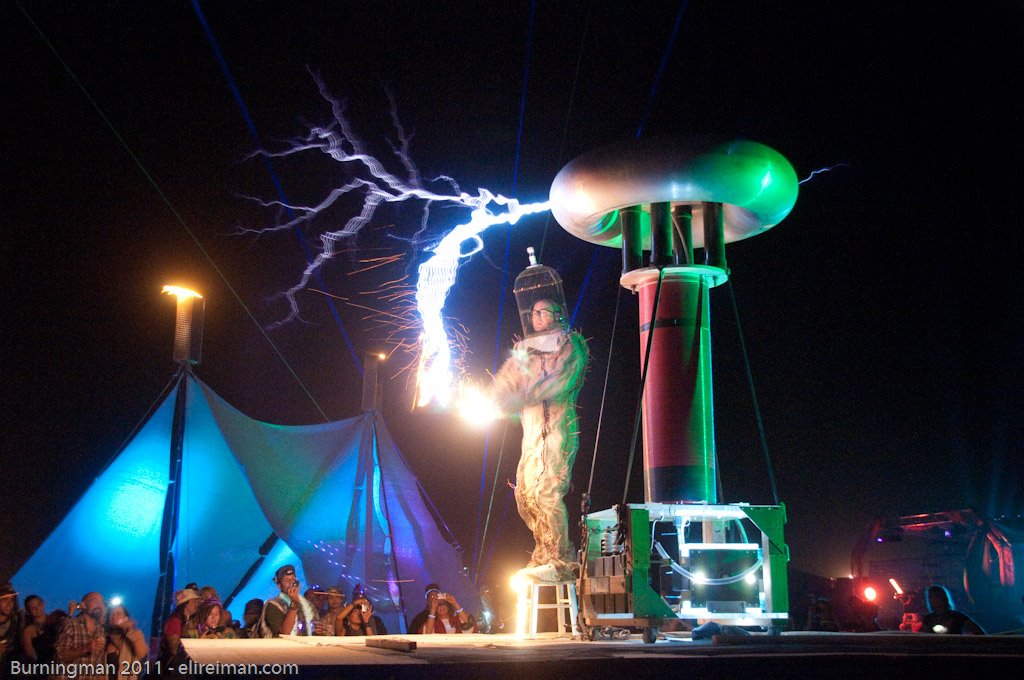 Dr. Megavolt – a guy with a metal birdcage over his head getting zapped by a 1.000.000 Volt Tesla Coil on top of a truck at Burning Man. Also known as Dr. Austin Richards. His homepage: drmegavolt.com. He wrote a compelling story about how he became Dr. Megavolt, who co-created the act with him, trouble and joy they had, eventual break ups and hick-ups, and the ongoing joy he gets out of it.

The official download is here in the story collection: Playa Dust Collected Stories from Burning Man by Samantha Krukowski.

Austin sent out a PDF of the story, you can download the rawer version here: “Everyone go piss on the ground stake – the story of Dr. MegaVolt at Burning Man“.

We are fans. Ingrid, Lars, Holger and I were electrified by his power performance in 2006, shouting “Megavolt! Megavolt! Megavolt!”. We also shot a crappy pic back then (this photo may feature Ms. MegaVolt I think): 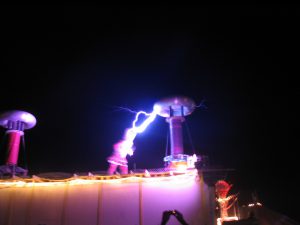 We didn’t just shout and shoot pics. We were also inspired. I loved it. I saw Austin pulling his own rented Diesel generator on the back of his own rented truck, playing with his self-built tesla coil, himself stuck in a homebuilt faraday cage. The whole rig sweated one message that I really understood: look, if Austin can pull it off, you can, too. It seemed doable.

11 years later in 2017 I can say: the inspiration worked. Having co-organized multiple burns and decoms in Austria and having brought art to burns all over the world, I can say that some of that sparks from Austin went through me and on into the world.