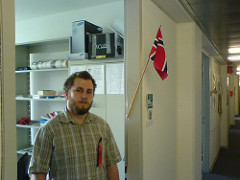 Gunnar celebrates Norwegian constitution day, which is 17th of May!

Note the flag and the stripe on his chest. cool.

Wikipedia explains this behaviour by the following historical incident:

After Denmark-Norway was attacked by England, it entered into an alliance with Napoleon, and in 1814 found itself on the losing side in the Napoleonic Wars and in dire economic conditions. The Dano-Norwegian Oldenburg king was forced to cede Norway to the king of Sweden. Norway took this opportunity to declare her independence, adopted a constitution based on American and French models and elected the Danish crown prince Christian Fredrik as king on May 17, 1814.