Ingrid gave me the great Tevion IWR 394 as a christmas present. 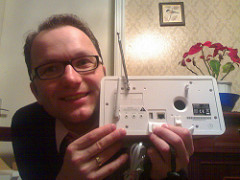 We named it “Adam“, our iPod is called Eve, so they are a good pair.
Adam has UKW FM radio, playback of mp3s on USB drives, internet radio (the first station I listened to is, of course, slay radio), management of favorite radio stations via the wifiradio-frontier.com webservice, Wifi connectivity, LAN RJ45 connectivity, playback of your own media collection using microsoft windows media player 11 media sharing, and he also has an alarm clock.

See it in action: 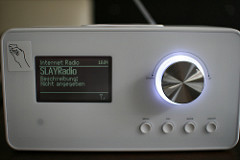 now the problem is of course: how can Adam playback my iTunes library from my Apple iBook G4 “Eden”? I have a backup of this iTunes library on my linux home server “Franse” – so hosting some magic server on Linux should do it, right? right.

My device is a Tevion IWR 394. I can’t find anything about it in the interwebs (crazy?! nobody bought this before?), so it is probably a branding of an asian white-label product. The menu shows a software “ir-mmi.arts.ven6-jupiter6.1_V1.5.6.21635-1A19”. It connects like a baby to a breast when using UPnP and my Windows XP laptop. FM/UKW radio, usb, also work easily.

Background: accoring to microsoft help of windows media player 11, the following ports should be opened to have media streaming working:
1900 UDP, 2869 TCP, 10243 TCP, 10280-10284 UDP. There is a wikipedia page on the Media_Transfer_Protocol which is to connect your media library to your USB device. For network media streaming, UPnP_AV_MediaServers seem to be the right place. There is a upnp server comparison table on wikipedia also.

How they meet this:

ok, having found mediatomb as my “easy way to go”, I try
sudo apt-get install mediatomb-daemon
fine! I see it installs it as daemon on rc2.d also, so it will start on system boot.
The various install instructions (ubuntu, official) go on:
sudo nano /etc/mediatomb/config.xml
hm, seems I don’t have to change anything in config.xml, that looks fine as it is. The password and username, ok.
I go to my server using
http://franse:49152/
(franse is my server name. it won’t work at your place)
Ok, I see a very minimal user interface, fine. Somehow I find the folder I want to share and click “+”, it starts indexing. That makes the mediatomb process jump to 80% cpu time on “top” for some 10:50 minutes. good.

It does not read/interpret my itunes playlists, though. Googling for itunes playlists in mediatomb does show an empty graveyard. Ok, but its possible to convert an “iTunes Music Library.xml” to several .m3u files using itunesexport, a java tool (here java bytes me again). Sadly, the ericaugherty sf version causes an out-of-memory even with -Xmx300m, so thats a bit annoying. There are zillions of shabby scripts out there to do it, but most don’t work, maybe this one does, as the author says. It does! But it needs some tweaking for folder names, which is done using the “-d” parameter. So the command is something like this (note the trailing shlash at -d) which I put into updateplaylists.sh
#!/bin/bash
python /home/leobard/local/bin/itunes2m3u.py -d “/home/media/music/iTunes/iTunes Music/” /home/media/music/iTunes/iTunes\ Music\ Library.xml

(at this moment, my newly discovered and totally weird emap.fm internet radio station plays the amazingly happy disturbing song “It’s so chic to be pregnant on christmas“, greetings to the pregnant-women-we-know B+S)

It seems importing m3u playlists into mediatomb is not out of the box. It goes something like this:

So to sum up: it would be good to have a DAAPD and upnp server in one, which could read iTunes playlists. BUT I am equally happy with my Tevion IWR 394 “Adam” and mediatomb.