You often read about failing in a startup and that founders who fail should start again and that failing isn’t bad, etc… also you often hear about “pivoting”.

This certain paragraph I love:
Have the courage to fail
Failure is a part of anything in life, but having the courage to face it head on is what makes you stronger. We hear so much talk about “it’s okay to fail”, but I don’t think there’s enough clarification. You shouldn’t let your startup as a whole fail, that’s not something you should easily let happen. Startups are really a compilation of many small instances of victories and failures. It’s embracing those small instances of failures that will let you learn and adapt better. Think of embracing failure as the entrepreneurial equivalent of an immune system. By embracing failure, you learn what went wrong, what’s bad, and how to prevent it from happening again. You build up a resistance to that specific instance of failure.

Last week a mail came through the NEPOMUK mailinglist, positive feedback. I am happy to copy it here – because it programmers like the KDE guys appreciate positive feedback, usually only angry people bother writing mails:
I’ve been playing around with Nepomuk and his cousins since the early
days. Posted to forums about setting up virtuoso when it was
introduced. I just wanted to make everything KDE to work properly; it
wasn’t like there was an major, urgent need for search.

Today I went looking for a file using search in Dolphin. Things have
come a long way with search. Fast and accurate. I found what I was
looking for with ease.

Thank you all so much for what you’ve contributed.

(p.s.: I don’t copy the name of the submitter, as I don’t know if he would appreciate it. If you are curious, check the mail archives)

Live Matrix, What’s When on the Web

It’s a tv guide for the Web. Neat. If you want to replace the telly with shows to watch on the web, this is the way to get to know what is running tonight. In their own words:
Live Matrix is the first guide to live and upcoming scheduled events on the Web. We link you to anything that has a start time and can be attended online: audio and video webcasts, live chats, limited-time sales and auctions, conferences, product launches, games and contests, events in virtual worlds, and much more.

Live Matrix was created by Nova Spivack and Sanjay Reddy. I recently met Nova in San Francisco shortly before beta launch and it didn’t take long to convince me that LiveMatrix is great. I will watch it tonight.

In a recent newsletter, they shared details how to import data into Live Matrix. There is the old-school web form, CSV uploads, and – alas – a way to specify feed URLs to be crawled by Live Matrix.

Read the LM_Event_Providers_White_Paper.pdf for the XML format specification.

as an old RDF/XML guy, I cannot hesitate to comment on the chosen XML format by livematrix:

So they “nearly” reused a standard (ISO dates, RDF, Atom) but like Facebook chose to “simplify” it. Alas, I would say “as long as you give a sample to copy/paste, you can include as many xml:ns declarations as you want in the top” but it seems this view is not shared with everyone.

In the document they say that they also support ATOM and RSS, so I guess if you already have an RDF or other stream with live data on the web, Live Matrix will be happy to include it.

At Gnowsis, we are looking for a new name for our personal semantic assistant. Currently we call it Cluug, but now it´s your turn to make it better!

Do you spend a lot of time reading email? Google priority inbox is there to help. It sorts your email inbox into “important” and “everything else” based on old messages.

Here is a lifehacker article on it.

Thx to Rick Boardman for telling me.

Ok, who from the Semantic Web guys and girls is going to Burning Man this year?

I am too busy preparing my art project “God Sees” to do all the semantic web querying – last time Dan Brickley connected me to Tom Longson. This resulted in this photo 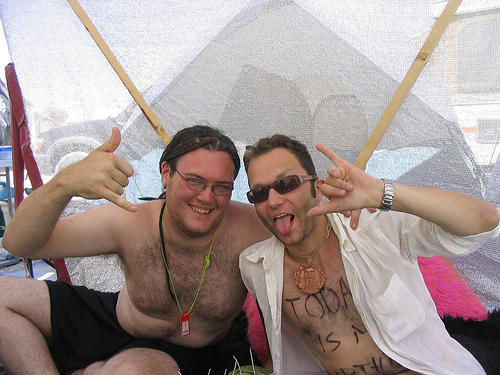 and a fucking awesome video where we explain semantic web to Mad Max (watch or skip to the end!):

and greetings to Dan Brickley:

this time I await more answers! Semantic Web and Burning Man have grown.

Btw: We have 2 beds in our RV for rent. Its a fair deal sharing costs, but you may need to adjust your travel plans. If you want cosy RV space, contact me.

You are not going to Burning Man but now you want? Do it. Don’t move it to next year (although, 3 weeks before the event, thats usually too late to organize everything, but anyway, next year you may be dead and talking to your maker – if that happens – only Jesus can save you – so- logic or not – be there once in your life).

Yesterday I started a blog series about the visonary path of the Semantic Desktop from Idea to product.

Here the start: Why I see the Semantic Desktop and PIM as visionary?

Why did I tag this blog post series as visionary?

For me, it started because I was having the problem of not remembering things. I could not remember the name of the girlfriend of my best friend.  Greeting her “Sonja” when her name is “Anna” caused trouble for me, and my best friend, because she would ask “Who is Sonja?”. To be honest –  I am also too lazy to remember everything. But with many things in life, like appointments, birthdays, or telephone numbers – everyone wants to be lazy and not remember everything, or?. In November 1996, I started taking notes and writing important facts down in both a digital diary with entries such as “Party on Friday” (I wrote my diary using AskSam, a flexible user-adaptable text database) and a detailled address book with contacts and phone numbers (“Anna”, “Sonja”).
But back then, technology was inherently broken, the tools at hand were: text files, databases, file systems, and the web. Using only this broken technology from 1996, it was not possible to “remember things by writing them down”. You think my requirements are sky-high? They are.
What I was looking for was the following: In my AskSam Diary I want to write “Today I met Anna, she is the new girlfriend of David, they met at a party of Georg on Friday”. From that moment on, the fact that Anna and David are a couple must show both in Anna’s and David’s address book entry (in Outlook), and the party at Georg must be a new event connected to both the new love relationship and Georg. That would be cool, and only that would also be satisfying. I knew information technology because I started my master courses that year (1996), and I was not aware of any standard technology to achieve this. I also had the intention to access these notes whenever I needed them – from my Palm mobile, from home, from the web. So I had a real urge to fix this and invent something we later called Semantic Desktop.
To not set the goal too easy, I knew that the overall goal must not be just a system to remembe things by writing them down, but a Cyberspace:
“Cyberspace. A consensual hallucination experienced daily by billions of legitimate operators, in every nation, by children being taught mathematical concepts. . . A graphic representation of data abstracted from the banks of every computer in the human system. Unthinkable complexity. Lines of light ranged in the non space of the mind, clusters and constellations of data. Like city lights, receding. . .”
William Gibson, Neuromancer, 1984
Why Cyberspace? It’s a 3-dimensional interface, and as humans are built by God via Evolution* to interact in 3D environments, the Cyberspace is intuitive to use by people. Cyberspace is like architecture: built by humans to serve humans. To contradict myself: building Cyberspace is of course a romantic and naive goal, and I am well aware that future information technology will look more than an Apple product than what William Gibson and Vernor Vinge described, also this is not our goal at Gnowsis.com and our product Cluug is not Cyberspace.
Still, Cluug and Gnowsis are in the world of Information Technology now and back then in 1996, if you wanted to build a global IT system like Cyberspace, you need: 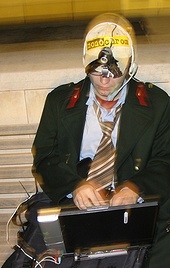 In
Vienna I was able to find the right friends in every area. To the right a
picture showing how interesting that time was – we tried out how wearable computing may work with low-tech infrastructure.

So, inspired by these great people and based on a good faith that God
wanted me to spend my time tinkering with computer architectures, I started thinking how I can take my contacts from my address book and glue them together with my diary and my files and my websites. Other people like Professor Stefan Decker had the idea at the same time and already had a name for it “Semantic Desktop“.
Similar minded, he found me on the web and got in touch. I went to conferences to talk about Semantic Desktop and met Ansgar Bernardi from DFKI, who later directed the EU project. In the following years I met many other people with similar ideas and enjoyed mingling with them.

Our journey to realize the Semantic Desktop began … to help me remember the name of my best friend’s girlfriend.

Follow these blog posts to learn more why we are sure that Cluug is the best and only way people can really remember information by writing it down. If you read so far, you may now have guessed why I love to call the tag this visionary.

* my stubborn believe in ancient christian scripture and historic figures makes Johannes Grenzfurthner call me the CyberChrist – I am proud enough of that to share it here.

Aperture, the useful File-to-RDF conversion framework, is now on Softpedia. We love this, it gets us more exposure.

Watch this video at G4TV on games and the future:

From my research perspective in personal information management and semantic web and a thourough knowledge of the literature in the area I can confirm that everything Jesse says is possible and right (well, besides the adword tattoo part, but its still inspiring).
During an interesting discussion with Cedric Mesnage and Gunnar Grimnes on 9.2.2008 at lake Lugano in Switzerland, I had the revelation that personal information management can also be seen as such a game.

If you are interested in working on this, join our startup gnowsis.com.

at the competition for semtech 2010 🙂

If you vote for us, we can to bring the semantic desktop to you quicker!