Skip to content
I wrote a converter to take an export from twoday.net and write it into an XML file that wordpress will read.

If you are wondering if you want to move from twoday.net to a wordpress blog, and if you can program python to understand how this works and how to run it, then you may want to checkout this script:

I won’t support the code, other projects more interesting.

Microsoft Streets & Trips (also called AutoRoute) will be discontinued by 31st December 2014. Looking for a better alternative? Then consider the online route-planner portatour®. portatour® supports multi-stop route-planning for up to 125 stops, it can show up to 1.000 addresses on a map and has many more functions for professional route planning and route optimization. It is especially useful for professional sales reps working in outside sales, support and service. Here is an article about it:

News: portatour is a Software for route-planning for field sales force / sales reps. It is the future of fully automated sales-route planning for your field sales force, consultants, and service team members. Automatic scheduling can cut up to 25% of your mileage and save CO2, increasing revenue the same time.

portatour® plans sales trips within seconds at the push of a button, giving sales reps back valuable time which would otherwise just be left on the road. They can visit more customers, drive fewer miles. 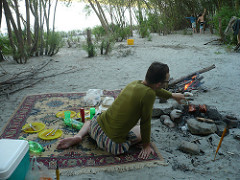 I finally achieved perfect barbecuing – or at least I am close enough to share my setup.

The essential part is: make two fireplaces, one with blazing fire and the other driven by embers taken with an iron shovel from the first. Other things in the picture are sugar-on-top.

The current protests against the Iranian coup d’etat and election fraud are by people like us. Allededgly, the official results were 12% for Ahmadineschad and 62% were announced. Iran has more people under 30 than in our country, they read the web, they blog, they want to live their lives without gov threats.
I pray for them.

At the moment, the protests are peaceful and heart-touching things happen, such as these protesters protecting a captured policeman:

As said on reddit, the other was coined “The Great Depression.” We start referring to the coming one as “The Bush Depression.” It’ll be one for the history books.

Listening to the radio news this morning, I heard that the US gov did not find 700billion in their piggybank to give away to scrupulous banks who screwed up their economy. Uhoh. Well, we are all in one boat, and if the US goes down, it will affect global economy. In the radio they mentioned the national banks of Belgium and Germany having to react (something like “have to print more money” but I didn’t get it…)

If the bank bubble affects the web2.0 bubble, I may lose my flickr pics and del.icio.us bookmarks, but Knallgrau, the european company hosting this blog is living on company contracts and will probably survice (I hope). Looking forward to the economy next year with mixed feelings – it will probably sort out itself.

If not, look for health packs and ammo on elevated places within the mayhem on the streets.

Its the perfect exception:

* Its stacked, many things happened at once
* I saw it only once and clicking OK solved it
* It includes a ASCII to UTF-8 encoding problem which usually means that you will rot in debugging for a long time
* It is related to the internet
* It mixes multiple languages: Deutsch und English
* You have no clue what it means
* It is truncated and it seems some important part is missing

I am from Austria, and have to blog about some particularity in Austrian history, the “Anschluss”.

The reason to blog, and also to do it in English, is a fatal quote by some elderly politician. On the 12th March 1938, 50 years ago, German troops marched into Austria and connected both countries to form the nucleus of the Third Reich. This is widely known and documented as “der Anschluss” (German term for “the connect”). This marks a dark day in Austrian history, reminded in many public rituals in the last week.

As part of a longer speech at a ÖVP meeting (the Christian-Democrat “conservative/republican” party in Austria), Otto Habsburg said: “kein Staat war größeres Opfer als Österreich”. Which translates to “no country was a greater victim than Austria”. This caused outcry in liberal/left parties and media in Austria, and I would guess also international reactions (if anybody noticed).

In the conservative audience, many giggles followed on some parts of the speech – making me speech-less. Here an article with a picture of our smiling ex-chancellor Wolfgang Schüssel and Otto Habsburg. You don’t fucking smile when you hear this bullshit, you leave the room. To his remedy, the article says that Mr Schüssel intervened and corrected the sayings of Habsburg (so much for inviting the right keynote speaker to your anti-nazi commemoration).

From what I know, shortly after the war Austria positioned itself as “first victim of Hitler”, to get rid of the scent of failure attached to losing the 2nd WW. Since then, this question is publicly discussed. The question is: did Hitler occupy Austria and the inhabitants were victims or was he warmly welcome and Austria was well-nazified already. Nobody can surely know, but some facts are historically known. Within a few weeks after the Anschluss, 70.000 people were imprisoned and a systematic, institutional, and coordinated suffering was imposed on Jews, Homosexuals, Left-Wing politicians, Communists, … . This was well prepared before, you need to have collected these names beforehand, it needs organisation and preparation. Within hours after the Anschluss, vandalism on Jewish property happened. It is hard to believe that Germans did this vandalism nor collected the names of “enemies of the state”, it can be assumed that Austrians did this, with the clear goal to steal some of this property their Jewish neighbours had worked hard for.

It marked the beginning of the holocaust and the role of the Austrian population was both victim, as the Jews and Left-Wings were Austrians, and agitators. Many had been forced to collaborate with the regime under the pressure of loss of life, property, and liberty, but surely not everyone had to be forced to collaborate. Austria was not “a little victim” or “the Jews were Austrian victims”, many people were attracted by Hitler or did not circumvent what happened. Objectively, it can never be known, but surely calling “Austria” a victim is far than politically uncorrect.

Personally, I hate it because many creative people, inventors, scientists, artists, queers, and freaks, were either killed or driven out of the country in the following years. And I hate the small-mindedness of some people who defend their ancestor’s sins as being right until today. (End of historical ramble, go on reading slashdot now folks)